THERE IS ALWAYS SOMETHING AT STAKE

FC Bergman is the most exciting thing to come out of Flemish theatre in the last ten years. The reason is simple: the young Antwerp company knows no reserve. Even the less successful productions are palpably inspired by a dogged zeal. If all FC Bergman productions are really about man’s struggle with what transcends him, then all the creation processes bear witness to that.

It rarely happens that a theatre performance makes such an impression that even spectators who have never set eyes on each other before feel the need to share their impressions afterwards. When that happens, you know you have witnessed something extraordinary. After the première of FC Bergman’s Van den vos (2013) at the Bourla theatre in Antwerp, the Dutch lady next to me remained quietly seated. The fact that I did the same gave her the confidence to turn to me a little later and ask almost in a whisper: “Have you ever seen anything like it?” We ended up having a drink at the bar and an unexpectedly intimate conversation about what we had just experienced.

It brings into focus the conviction with which FC Bergman approaches everything it undertakes but also its impact: artistically mature or not, every play by these six young theatre-makers is at least an event. By that I don’t mean that FC Bergman aims to provide experience theatre – that outmoded term smacks of marketing, of the gimmicks of the entertainment fair. Whereas ‘experience theatre’ is out for the ooohs and aaahs of the spectacle, what FC Bergman is after is a moment of (instinctive) perception, an understanding of a deeper truth about life, even if that truth is extremely unpleasant. For the Bergmannen, theatre must be a live happening, a unique and non-reproducible ‘being together’ which can result in a collective perceptiveness. Like a curtain of ‘knowing’ that opens briefly – hence the need to air one’s views with others afterwards. “Did you feel that too?”

Van den vos is undoubtedly the best play FC Bergman has made to date: a magisterial allegory about the evil inside every human being, about the sly fox in every good bourgeois citizen. No wonder the symbolic meeting place of the bourgeois needed an overhaul: the company had all the stalls in the bourgeois theatre removed and the ground-floor turned into a marble swimming pool around which the actors performed. The spectators sat in the balconies and looked down at this spectacle of self-revelation. Van den vos was a good example of total theatre, of the perfect synthesis of script, acting, video and music. Clearly, not all FC Bergman’s shows achieve that level. Predecessor Terminator Trilogie (2012), made on location in the port of Antwerp, missed depth of content and dramaturgical precision. Yet one cannot deny that even FC Bergman’s lesser plays remain ingrained on the memory. This is partly to do with the intensity and explosive energy the six theatre-makers inject into their shows, and partly with their uncompromising choices of form.

Stef Aerts, Matteo Simoni, Thomas Verstraeten, Bart Hollanders and Marie Vinck – all born between 1982 and 1987 – first met as students at the Artesis Hogeschool, the former Herman Teirlinck Institute in Antwerp. Stage technician Joé Agemans joined the ‘Foute Club’ (‘Wrong Club’ or ‘Football Club’) Bergman a year later. In 2008 a part of the group created an anarchistic and fast-paced adaptation of Harold Pinter’s The Homecoming, which was awarded the Young Theatre Prize at Theater Aan Zee 2009 in Ostend. The same year also brought a production with the unmanageable title Wandelen op de Champs-Elysées met een schildpad om de wereld beter te kunnen bekijken, maar het is moeilijk thee drinken op een ijsschots als iedereen dronken is (Walking along the Champs-Elysées with a tortoise so as to get a better look at the world, but it is difficult to drink tea on an ice floe when everyone is drunk). Loosely inspired by the Inferno from Dante’s Divina Commedia, the play is best described as a bouquet of exploding images: large-scale, monumental and dangerous in the most literal sense of the word. The six performers constantly risk their lives in this bal infernal in which they fly, dive off balustrades, play with fire and drag whole machines onto the stage. Most memorable of all is the passion: these six have something to say and they have a burning need to say it, even if their experience is limited and their mastery of the medium still rather raw.

All this changed when the Bergmannen joined the pool of theatre-makers at the Toneelhuis in Antwerp in 2013. That rapid ‘recuperation’ – they had been together for barely five years – made for an occasional raised eyebrow because there was always the danger that the large machine of the city theatre would tame their temperament, that FC Bergman would become decent, socially acceptable. At the same time there was something falsely romantic about that desire to keep the group ‘pure’ and ‘punk’ but consequently also small and impotent, as if the authenticity of a theatre-maker is judged by the scale of his suffering. A play as demanding in terms of production as Wandelen op de Champs-Elysées… almost finished FC Bergman off physically. The Toneelhuis promised an artistic discussion but most of all also the right technical and logistical framework to realize its ambitious dreams. FC Bergman made the leap to professionalism and with a production like 300 el x 50 el x 30 el showed that the machine had not tamed them, but served them. Not so much because a complete village appeared on the stage of the Bourla theatre, including spruce forest behind it, but above all because six young guys had managed to get the whole technical team and scenic workshop on side to realize this near impossibility. Necessity is infectious, it seems.

What FC Bergman has to say cannot be separated from the way it says it, with both content and form aiming at ‘large scale’. The company likes to work in big locations (in a minority of cases the theatre), with big groups (extras) and big gestures (pyrotechnics, special effects). Not so much because it is striving for effect, but because what it wants to get off its chest requires that approach, or rather demands it – FC Bergman’s recurrent message is simply not suited to an intimate setting. With the Bergmannen it is never about the particular, about individual dramas or petty emotions. There is always more at stake. With FC Bergman human existence is a succession of tragic attempts to grasp the incomprehensible. Man makes a last desperate effort to take charge of his life but however hard he struggles, he always comes up against superior forces. FC Bergman regards that struggle, shown with great love, as the essence of life. The naive belief in the manipulability of the world is doomed to failure, but failing is not an end point, it is the starting point for a new venture. And best of all, the failure makes wonderful viewing.

Beauty is a necessary counterpoint to this seemingly rather pessimistic-existentialist world view about the struggling human being. The beauty of every powerless attempt to resist fate generates a meaning that pushes FC Bergman beyond an easy deterministic nihilism. That is certainly the case in Het land Nod (2015), a play in which art becomes a literal but above all metaphorical place of refuge for the weary ‘nobody’. Though Het land Nod is not a masterpiece like Van den vos, again it is remarkable how meticulous content and form converge, how a big existential struggle for survival is shaped by equally big gestures and dimensions. The impact of spatiality should not be underestimated in this play, and that is food for thought. The thirty-year domination of the small theatre has made not only theatre-makers but also spectators forget what it means to be brought into a large space – even before a single dramatic action has been performed – not into a sitting-room or huis clos, but into a space that manages to embody another world. The contrast between the small actor’s body (or spectator’s body) and the dimensions of a huge location is self-evident: it appraises man against the yardstick of the world, not the other way round.

For Het land Nod  FC Bergman created an exact, life-size copy of the Rubens Gallery at Antwerp’s Royal Museum of Fine Arts. The prestigious museum has been closed for restoration since 2011, and Het land Nod begins at the point that the museum’s principal gallery has almost been stripped of its imposing artworks. As the audience enters, technicians in blue overalls carry out the penultimate painting. All that is left on the wall is Rubens’ Coup de Lance, a painting of herculean proportions and of an impressive symbolic magnetism, even when you know it is a copy. In this enormous space and in the presence of this enormous painting, man can be no more than an insignificant, humble being. Interestingly, the Bergmannen have increasingly effaced themselves from their own sets in recent years. In Terminator Trilogie a naked man lay helpless (and at the première: in terrible circumstances) on a vast expanse of concrete, while in the distance gigantic container ships coolly stayed on course. In Het land Nod the six performers come and go in front of the gigantic painting as casual passers-by. They don’t play ‘characters’, but their fragile bodies emphasize the grandeur of their surroundings. It is a paradox of pride and humility: few (young) companies dare to make such demands on their house in terms of production, to then be upstaged by those megalomaniac decors.

Man’s struggle against the forces around him is embodied in Het land Nod by means of the rather schlemiel restorer (Stef Aerts), who concludes that this Rubens is just too big: the painting won’t go through the door of the gallery. The tragicomic attempts he makes throughout the play to get the canvas out – from sawing off the frame to dynamiting the door – are just a thin line of slapstick on the surface of Het land Nod. Underneath is an investigation of what the space means, what possible meanings the museum gallery had – in the past – or might have in the future. The star of Het land Nod is undoubtedly the Rubens Gallery itself, which transforms in front of our eyes from a real space (where people come and shelter from the rain) into a metaphorical place. FC Bergman defines that place as a shelter from the war, as a refugee camp, as a place for individuals to reflect, but above all as a living place. The museum is anything but museum-like: life storms in and out and breaks through the walls if it must, like a marvellous choreographic variation of the famous Louvre scene in Godard’s Bande à part.

That makes Het land Nod a new link in the oeuvre of this young company which, despite its early (and international) success, manages to remain true to itself and to give of itself time and time again with such conviction. In a nutshell, Het land NOD contains everything that FC Bergman stands for: the illustration of a tragic world view expressed in monumental forms and imbued with the energy of six young - but now mature - theatre-makers who have lost none of their refreshing radicalism. 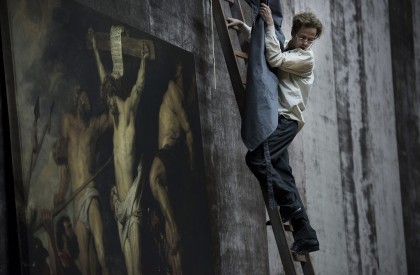 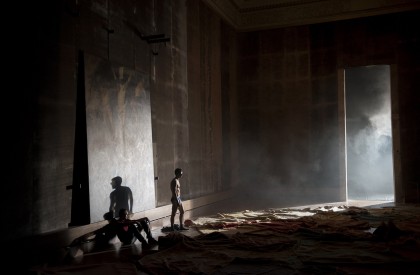 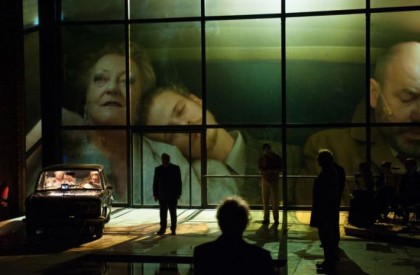 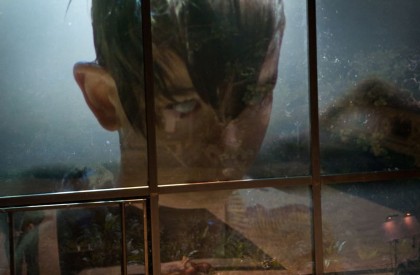 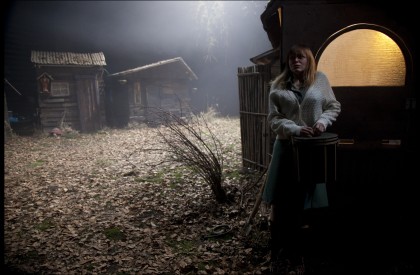 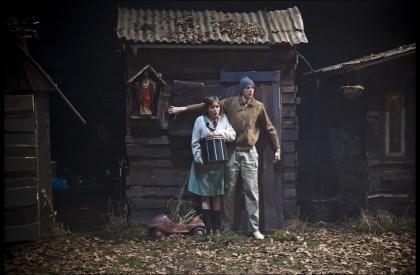 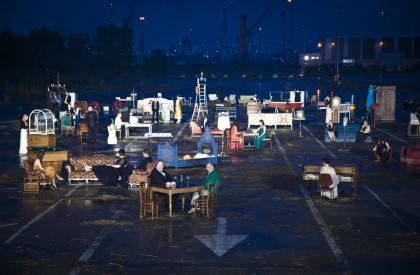 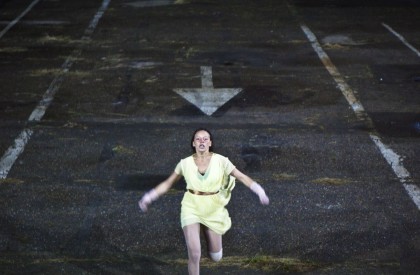 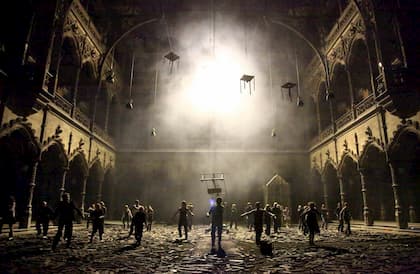