Walking along the Champs-Elysées with a tortoise so as to have a better look at the world, but it is difficult to drink tea on an ice floe when everyone is drunk

"After all, we are all dreamers by nature, brothers under the sign of the trowel, born master builders" (B. Schulz)

'Wandelen op de Champs- Elysées (...) als iedereen dronken is' begins here and now. It takes a look at man as he is, was and probably always will be: fearful, alone and as sinful as the deepest sea is deep. It is in short a story about us and, we suspect, also about you.

We follow four mythical figures (the Crane Man, The Mental Concept Bakkie, the Blind Flying Woman and The Blue Artist) who have gradually become painfully aware of what is described above… And it makes them afraid. It terrifies them. Literally. The fear of dying grips them by the throat. For is it not written somewhere that all the evil deeds committed here on earth are punished in equal measure ‘below’.

Each of the four begins a personal struggle. They look for a way of avoiding death, or rather, of surviving life.

'Wandelen op de Champs-Elysées...’ is a visual production based loosely on Dante Alighieri’s ‘pine Comedy’ (the book in which the writer describes his journey to the middle of hell) 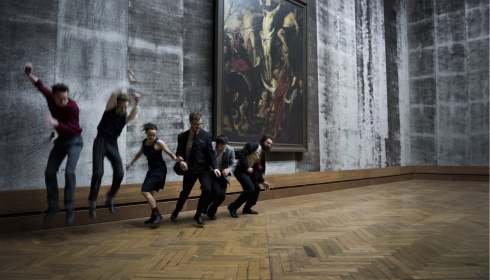