Guy Cassiers talks about a European sequel, creating more international versions of this production, in many different languages.

"Het kleine meisje van meneer Linh is a European project for me. Europe has been an important theme in my work for a long time. Productions like Bloed en rozen, Het lied van Gilles en Jeanne, Duister hart, De man zonder eigenschappen, Mefisto forever and De Welwillenden [Blood and Roses, The Song of Gilles and Jeanne, Dark Heart, The Man Without Qualities, Mephisto Forever and The Kindly Ones] take explicit moments in European history as their points of departure: the power of the Church in the Middle Ages, colonialism, the collapse of the old European order in 1914, the rise of Nazism and the Holocaust. I use history to say something about the confusion that prevails in Europe today. With Het kleine meisje van meneer Linh, I deal with the very topical theme of refugees, one of the great challenges currently confronting Europe.

In addition to the subject matter, however, with this production the work process itself now has a European dimension. This is a new form of international collaboration for me. We did the show Bezonken Rood [Sunken Red] in four different languages: Dutch, French, English and Spanish, with the actor Dirk Roofhooft learning his part in the language of each country we toured in. For Het kleine meisje van meneer Linh, we are taking this a step further, changing not only the language but also the actor. In each of the coproducing countries, I will be making a new production with an actor from that country. That way, the actor, his language and culture will have an impact on the content. Each actor will be intensely involved in the revising of the production. At the moment I am working with Jérôme Kircher. His ‘French’ Linh will be very different from Koen De Sutter’s ‘Flemish’ Linh and different again from the ‘Spanish’ Linh… This is a completely new way of working for me. With Het kleine meisje van meneer Linh, Toneelhuis is developing a much more intensive trajectory with our coproducing partners in Europe. On each occasion I will be letting myself be influenced by a different language, a different actor and, last but not least, a different audience. In short, you might say I’m sort of putting myself in Mr Linh’s place: surrendering myself to a different context and a different language.

In each country, the refugee theme will have a different impact, depending upon the political and historical sensitivities of that country and the debates being conducted there. It will be exciting to see the production evolve through various languages and in the hands of different actors. My dream is to eventually set up a dialogue between the different versions, for instance by putting four, five or six Linhs on stage at the same time…! It may seem a bit of a paradox, but a production about the limitations and barriers of linguistic communication is also a kind of ode to the richness and individual character of the various European stories. An individual character that only gains value and meaning through and in the differences between them, however." 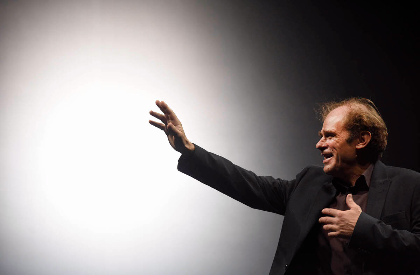