‘The Sheep Song’ goes down under at Adelaide Festival 2023

After a successful American premiere of 300 el x 50 el x 30 el in September theater company and Toneelhuis associated collective FC Bergman will travel to Australia in 2023, during the Adelaide Festival with The Sheep Song. The collective is continuing to work on an impressive international track.

During the Australian performances Titus De Voogdt will replace Jonas Vermeulen, who just broke Belgian attendance records as the lead in the movie Zillion. Both actors recently met up during rehearsals (pictured).

In The Sheep Song, FC Bergman talks about a being that is no longer satisfied with itself. It feels that it has more within it and that it is destined to lead a more glorious life than that of its fellows. Ovis Orientalis Avis prepares to undergo the ultimate transformation, determined to defy fate, the laws of physics and good taste. Dark clouds appear on the horizon. The pounding of hooves makes the earth tremble. The gaping mouth awaits. The desire for change proves to be a storm that is difficult to quell.

The Sheep Song is a wordless performance, but it still gained a lot of word of mouth. From rave reviews to standing ovations, the performance moved everyone. FC Bergman will undoubtedly do the same on the opposite side of the world. Get ready. 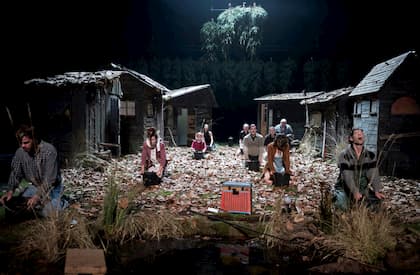