Antigone in Molenbeek and Tiresias. A diptych.
In a double bill of monologues, director Guy Cassiers tells the story of Antigone, a young girl who says ‘no’ to the authorities, and then the story of the blind seer Tiresias, who during his lifetime has been both a woman and a man.

Stefan Hertmans and the young English slam poet Kae Tempest rewrote these classic myths in a contemporary idiom and placed them in an urban context.
In Antigone in Molenbeek (Hertmans), the protagonist, a Muslima, wants to bury her dead brother, an ISIS suicide bomber. The authorities refuse to release his body and Antigone cannot carry out her process of mourning. Ikram Aoulad plays the role of Antigone.
In Tiresias (Tempest), the identity of the protagonist slips from man into woman into blind seer. From their isolated positions, Antigone and Tiresias each expose the suppressed sexual, social and political prejudices in society. A monologue by Katelijne Damen.
Besides the visual technology, music also plays an important role. The two narratives, each in their own way, enter into a dialogue with String Quartet No. 15 by the Russian composer Dmitri Shostakovich.
In June 2021 a French version of the performance will also be made: Antigone à Molenbeek + Tirésias, with the French actresses Ghita Serraj and Valérie Dréville.

Guy Cassiers worked with two generations of women in tackling two dramas about rebellious outsiders that turn out to be surprisingly fitting in today’s law and order society.

"Tiresias and Antigone are both outsiders who refuse to accept the restrictive political and sexual pigeonholes that patriarchal society imposes on them. As classic figures, they each in their own way offer a dissenting voice against dominant contemporary views. This is also why Toneelhuis director Guy Cassiers stages them together, as successive monologues with more or less the same scenography and the same soundtrack – String Quartet No. 15 by Dmitri Shostakovich."

"Aoulad excels in using the camera to subtly portray her role.... Damen lets the timbre of her voice dance through the words. Her body dances along. Watching her perform is pure pleasure."

"Addressing the audience, Aoulad conveys her character’s pain and resolute sense of justice with both elegance and quaking rage. In “Tiresias,” the actress Katelijne Damen recites a blistering, dizzying poem by the young British poet Kae Tempest, a subversive retelling of the myth of the blind, gender-fluid prophet. Damen’s rendition of the virtuosic text is shot through with grace and wit. Especially impressive was how the Toneelhuis’ wide-screen camerawork (shot by Charlotte Bouckaert, who is also responsible for the set) succeeded in capturing the power of chamber theater."

"Partly hanging over a table, Katelijne Damen sensually tells how Tiresias celebrates her femininity. With her silky tone, this great actress ... knows how to add her own colour to Tempest’s expressive language." 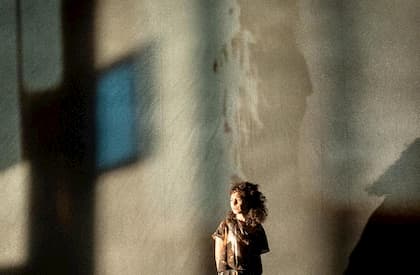 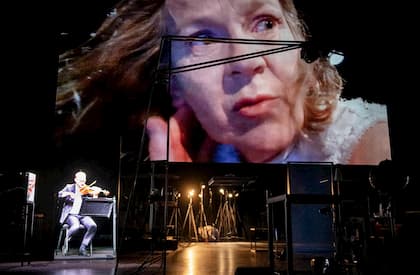 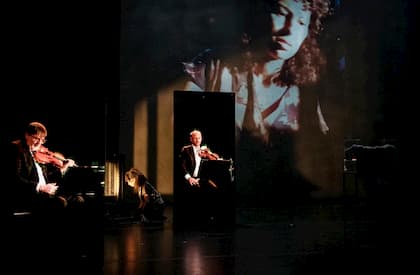 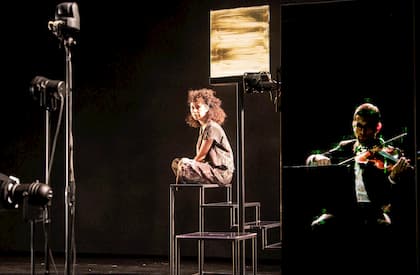 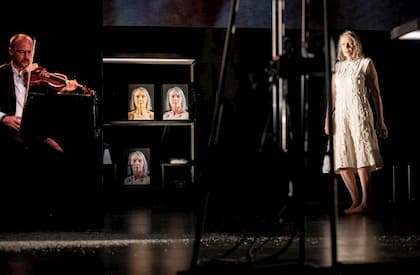 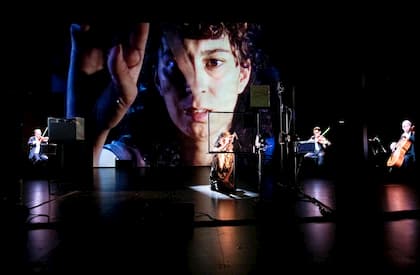 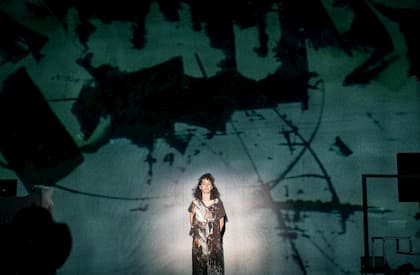 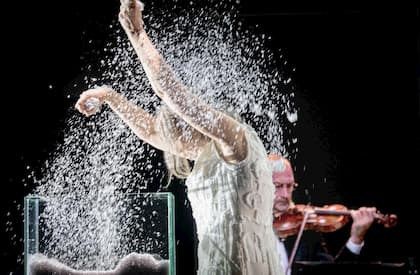 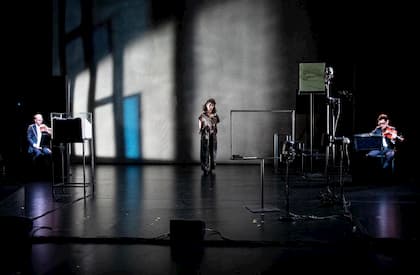 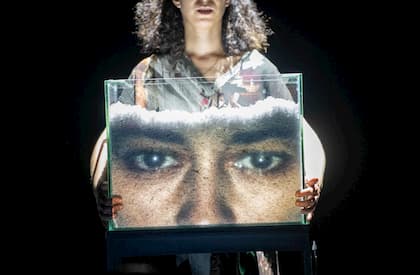 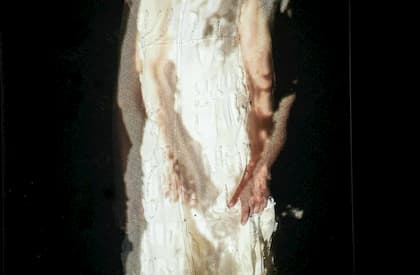 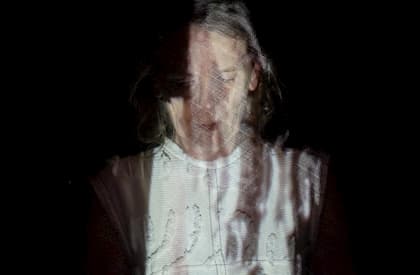 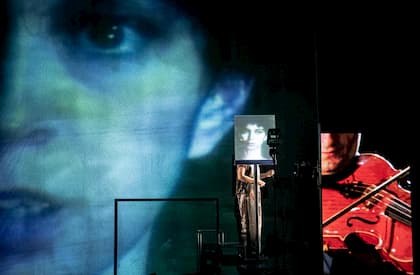 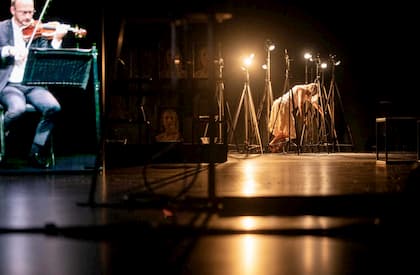 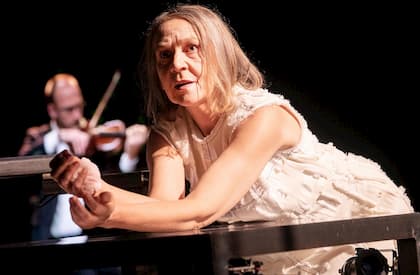 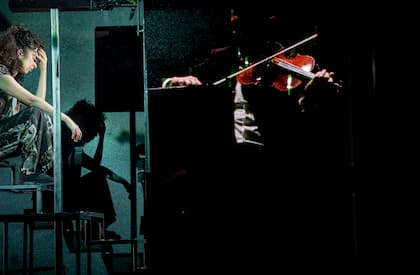 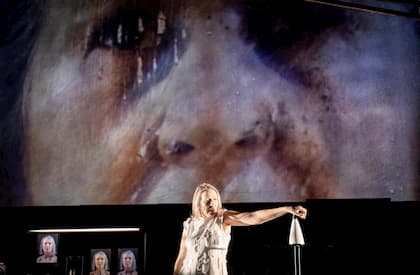 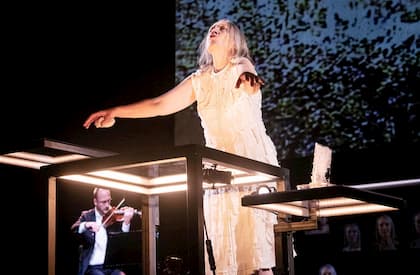 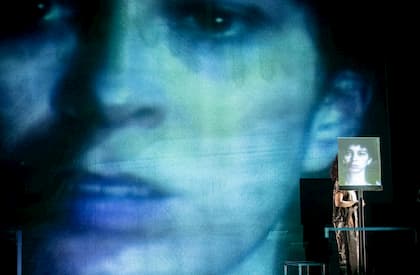 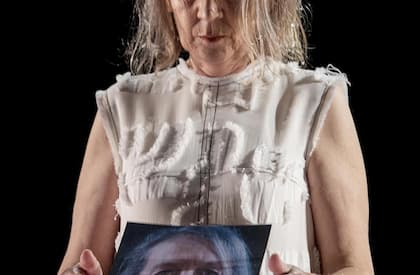 Location
at Toneelhuis and on tour
Duration
2h45 , inclusief pauze

News about ‘Antigone in Molenbeek + Tiresias’ 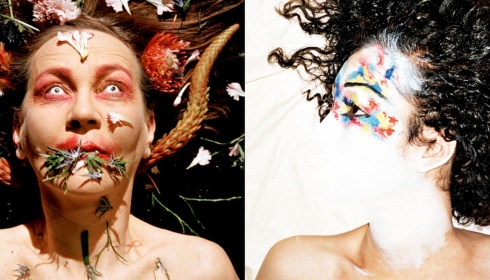 On 23 January, Antigone in Molenbeek + Tiresias, the double bill of monologues directed by Guy Cassiers, was shown online in the Lessingtage festival. The international press was also among the spectators. 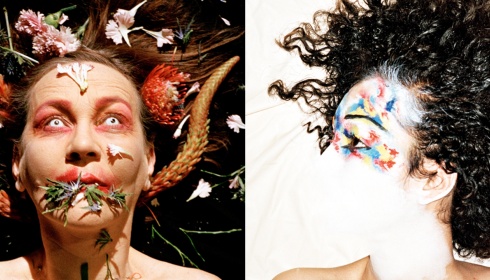 Thalia Theater, a German company in Hamburg, and Dramaten, the Swedish national theatre in Stockholm, are co-organizing the first European online theatre festival. Both are members of mitos21, a European network of the continent’s leading theatres, to which Toneelhuis also belongs. 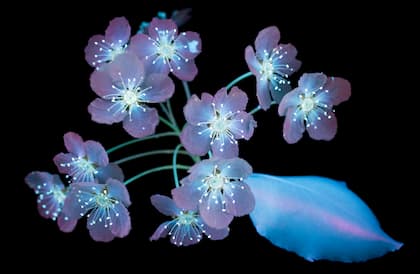