on the 25th of november last year
I experienced something extraordinary

belgium too was on the highest state of alert

had already occupied the city months before that

the weeks following the attacks
it was awfully safe on the meir shopping street, outside the kinepoliis, in the bourla theatre
and at the delhaize supermarket to the south

on the 25th of november last year
I was with my youngest daughter in the woods,
at a youth centre on the ankerrui in antwerp,
for something
that had been announced on the calendar as
whacky woods
the craziest kid’s party in town
there were
pupils from different antwerp schools,
asylum centre dwellers
and children from red cross relief programmes

I looked with tears in my eyes
at that mishmash going bonkers
to just about every music style on the planet,
with as highpoint the appearance of tatyana from ketnet

there was not a district cop,

not a city supervisor,
not even a mailman

but a simple ignoring of the entire discussion

perhaps,
I reflected later,
this is what harald welzer meant when he
noted down a guiding principle of resistance
... it’s about looking for places where it’s possible to perforate our dense reality

a reality we seem to be subjected to
because we think it is essentially unchangeable
yet even that isn’t putting it correctly
the mark of our age is sooner
that we freely subject ourselves to the ultramodern cage of serfdom...

the reason for my being there is
a little film in which the economist milton friedman
uses a pencil
to explain how the mechanisms of the free market work
the lead comes from south africa,
the wood from the western united states,
the aluminium from china,
the paint from india
the eraser from the netherlands
and all those people,
driven by an invisible hand called competition,
work together on that pencil
so that you can buy it for the best price
and contribute to harmony and world peace.

I wanted to use a few examples

with the help of a felt-tip pen

when I look at that photo again in the evening
I’m reminded of an incident involving the argentinian writer julio cortazar
and how strikingly that incident illustrates the sense of possibility.
around 1970, cortazar was reproached for making

work that was frivolous and noncommittally humorous
in respect of the political situation in his country.
he answered:
“I believe
that the struggle for socialism in Latin America
should confront the daily horror
with the only attitude
that can bring it victory one day:
a precious, careful watch over the capacity

to live life as we want it to be for that future,
with everything it presupposes 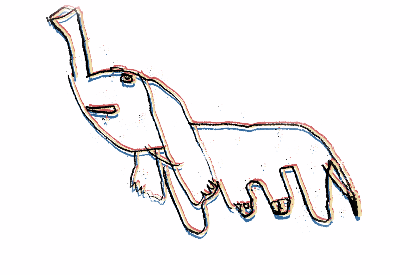