Wereldtournee in Antwerpen was selected for Het TheaterFestival! On that occasion Benjamin Verdonck brings his new Continuum to DE SINGEL in the good company of Stef Kamil Carlens.
During his Wereldtournee in Antwerpen, Benjamin Verdonck travels with a tiny theatre box from laundry room to residential centre, from front door to balcony. In the box are small objects that he can easily take along and show to people.

A 'world tour', but then in Antwerp. From the idea that you can discover the whole world in one city. Armed with small wooden boxes, he sets himself on Antwerp's streets and squares. There, he speaks to people to show them how a little fox and a piece of sausage emerge from them. Or he brings colourful geometric figures to life to the music of Philip Glass.

Whether in the street or on the big stage, Verdonck creates an imaginative and pocket-sized space.

At Het TheaterFestival he and Stef Kamil Carlens bring their new Continuum to DE SINGEL.

Colourful surfaces on swaying shutters that roll on and off and effortlessly come and go. A showcase that can play to a larger or smaller audience, day or night, indoors or out, without beginning or end. A tried and tested recipe of many strings, accompanied by a live score by Stef Kamil Carlens.
Follow the story of Verdonck Wereldtournee in Antwerpen here. 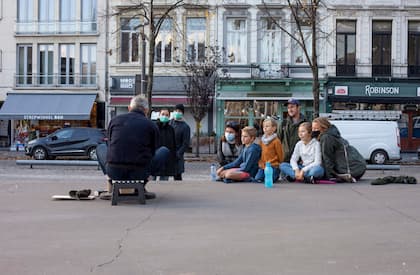