Abke Haring on her words and images

My father is a photographer and used to work for a newspaper, originally as a typesetter.  That I’m drawn to images on the one hand and letters and words on the other is something I probably got from him. I thought the dark room was a magical place: images slowly appearing from nothing! But I was also drawn to lay out, fonts, different types of paper – thick or thin, hard or soft. I’m crazy about the thin paper you find in some types of dictionaries such as the one-volume Dikke Van Dale. That paper is even thinner than the paper in the Bible.

I am fascinated by ‘blank’ photos, by the placement of certain objects. One of my great favorites is Nadav Kander. He has a photo series titled Chernobyl, Half Life. Photos of collapsed buildings and the crumbling interiors of Chernobyl, without any people present. Incredibly beautiful.

The Japanese photographer Rinko Kawauchi takes pictures in extreme detail. For example, a chick breaking out of an egg. He focuses on a few hairs of the chick. As you view the photos, you often don’t even know what you’re looking at.

My father has a lot of cameras. I took my first photographs with a very small camera in which you couldn’t see what you were photographing. I must have been almost eighteen then, otherwise I would never have gotten the camera.

I don’t read all that much. I don’t have the patience for it. But I spend a lot of time looking at photo books. But for some reason or another I have the idea that reading is more important than looking at photos. I always think that I should read more.

For the scenography of my latest production HOUT, I’m collaborating with the artist Jean Bernard  Koeman. That’s going really well, perhaps because he’s also a photographer. He really thinks in pictures. It’s easy to communicate with him.

In my photos, I really enjoy working with details, with the position of something, how the light falls, with the transition from sharp to fuzzy, with the details that other people have left behind. I’m fascinated by the disintegration or dissolution of form: cracked wood, rotten food, dead flowers.

The photos are largely associated with observations and less so with emotions. For example, I took a lot of photos during the extended tour of Mefisto for ever in all the various cities and hotel rooms.

I don’t think I’ve ever photographed people. To me that seems incredibly difficult. I do love Lee Friedlanders book FAMILY, in which he captures his family on film over a period of years. Also, Sally Mann of Nan Golding takes very beautiful portraits.

The text I’m writing for HOUT has a lot to do with photographs. They both focus on small things, details -- in an almost obsessive way. I always see too many details. All the details are tied together. My head is full of details.

The text for HOUT is becoming more and more like a poem, various poems. I don’t quite have a handle on it yet, but I find the writing process very exciting. This is a new development for me, the fact that fully formed blocks of text just fall into place. For the moment I don’t want to focus too much on the process. I still find it all very fragile. I don’t know yet if all the text I’ve written can be spoken in the performance. I always love words you can see. Words as pictures.

Recorded in the original Dutch by Erwin Jans 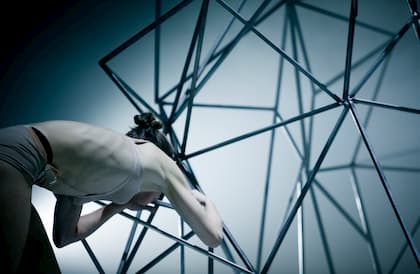